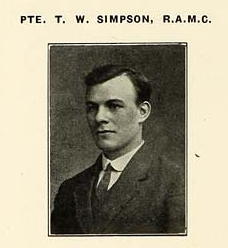 Private Simpson was serving with 46th Field Ambulance unit supporting the 15th Scottish Division troops at the time of his death, however is service number is one of a batch allocated to the 3rd Highland Ambulance unit. This suggests that he may have been transferred from one to the other at some stage in his military career.

Thomas was the fifth son of James Simpson and his wife Emma McDonald, Broughty Ferry. Before enlisting in May 1916 he was assisting his father, a well known Arbroathian, in his printing office in Broughty Ferry. He served  in France for 14 months, and while engaged in ambulance work he was killed by a shell near Soissons on 24 July 1918. Private Simpson had 4 brothers on service. A poem to his memory, by William Birrell, author of “War and Patriotic Poems” was published in the Broughty Ferry “Guide.” (Arbroath Roll of Honour, page 194).

Mr James Simpson, stationer and printer, Brook Street, Broughty Ferry, was yesterday notified that his fifth son, Private Thomas W. Simpson, R.A.M.C., had been killed in France.  At the time of his death he was attending the wounded in a casualty station, when a shell came over and caused many casualties.  At the time of enlistment, two years ago, the deceased soldier was a printer in his father’s office, and was well liked by all who knew him.  Mr Simpson has other four sons serving, two being commissioned officers in the navy, one a sergeant in the A.S.C., and another in the Argyll and Sutherland Highlanders.

He was a former pupil of Grove Academy, Broughty Ferry and is remembered on the schools war memorial.

Can you tell us more about Thomas William Simpson'? Some additional facts, a small story handed down through the family or perhaps a picture or an heirloom you can share online. Contact our curator...