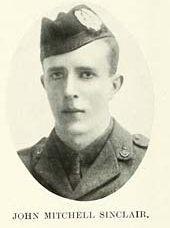 John has no known grave but is remembered on the Doiran Memorial.

TO SAVE HIS MEN.

“Second-Lieut. Sinclair told his men to go on and he would stay himself.  He was shot and bayoneted by the advancing enemy.”

Lieut. Sinclair was 21 years of age, and was studying at St Andrews University for the ministry.  He was in his third year in his arts course.  A younger brother is at present at the front.

Can you tell us more about John Mitchell Sinclair'? Some additional facts, a small story handed down through the family or perhaps a picture or an heirloom you can share online. Contact our curator...