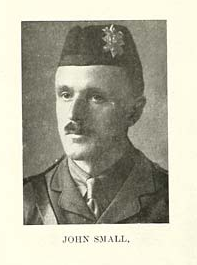 Son of John and Elizabeth Small of Broughty Ferry.

The death is reported in action on April 29th of Lieutenant John Small, who is well known in Broughty Ferry. Lieutenant Small was the only son of the late Mr John Small, of Wentworth, Jamaica and Wentworth Broughty Ferry, who was the first man to cultivate coconuts in Jamaica, which he started to do 1853.

Lieutenant Small was educated at the Dundee High School, took his M.A. degree at St Andrews when he was 18, and his LL.B., with honours, in Edinburgh when was 21.   He was advocate in practice, and joined the Royal Scots the outbreak of the war. Shortly afterwards he got, a commission in the Black Watch. He had been on active service since September 1915.

Can you tell us more about John Small'? Some additional facts, a small story handed down through the family or perhaps a picture or an heirloom you can share online. Contact our curator...