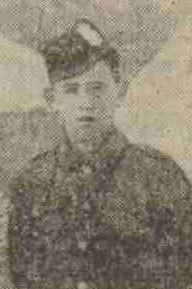 Private Alexander Smeaton, whose name appears among those killed in action, is a son of Mrs Smeaton, 70 James Street, Dundee.  He was the youngest of four brothers serving.  Private Smeaton enlisted in the Black Watch shortly after the outbreak of war, and had been at the front since February of this year.  He was 19 years of age, and was prior to enlistment employed in the winding department of Bowbridge Works (Messrs J. & A. D. Grimond.)

Can you tell us more about Alexander Smeaton'? Some additional facts, a small story handed down through the family or perhaps a picture or an heirloom you can share online. Contact our curator...