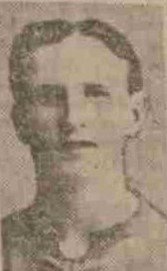 A well-known Dundee footballer has died in his country’s cause in the person of Gunner Alex. Smith, R.F.A.  Official intimation of his death has been received by his mother, who resides at 8 Brown Constable Street, Dundee.  Gunner Smith, who was 26 years of age, was previously employed as a tenter by Messrs R. G. Kennedy & Co., manufacturers, Wellington Works, Ann Street, Dundee.  Deceased first came into prominence as a footballer in the ranks of the Lochee Central, a now defunct junior combination.  He afterwards played for Dundee “A.”

Can you tell us more about Alexander Smith'? Some additional facts, a small story handed down through the family or perhaps a picture or an heirloom you can share online. Contact our curator...