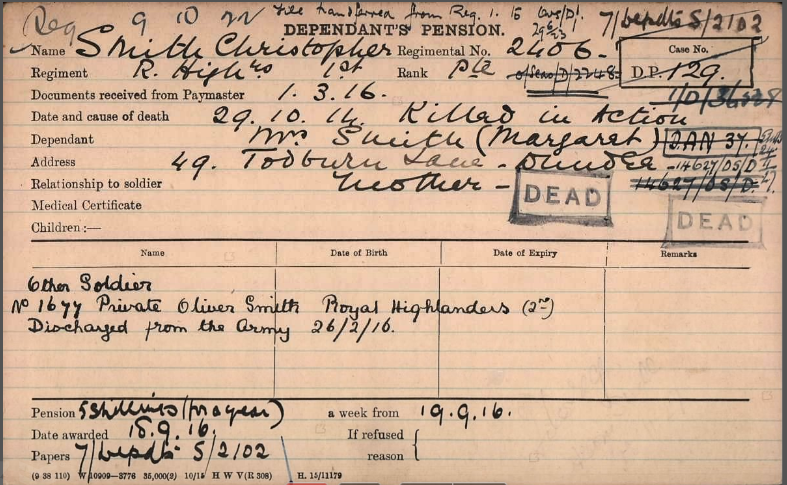 Christopher has no known grave but is remembered on the Menin Gate Memorial. He was the Brother of Pte Oliver Smith, 3/1677, 2nd Battalion Black Watch, who was discharged from the army 26.02.1916 due to a gunshot wound to the head.

No district in Dundee has been more heavily hit by the war than that short alley of working men’s dwellings off Princess Street known as Todburn Lane, from which the Germans have exacted an extremely heavy toll. Five casualties in this particular quarter have already been reported, and to-day there falls to be announced the death of another.  The latest victim is Christopher Smith, son of Mr William O. Smith, who resides at 49 Todburn Lane.  Deceased was a regular in the 1st Battalion of the Black Watch, which he joined about 2½ years ago.  Although scarcely 20 years of age—his birthday would have been on Christmas Eve—he was a big, handsome young fellow, and made a typical soldier.  It is eight weeks since his parents received the last letter from him.  They were hoping against hope that he had been taken a prisoner, but their worst fears have now been confirmed through the receipt of an official message from the War Office that the young man was killed on 26th October.  Deceased’s elder brother, Oliver, who is in the 3d Black Watch is also in France.

Can you tell us more about Christopher Smith'? Some additional facts, a small story handed down through the family or perhaps a picture or an heirloom you can share online. Contact our curator...