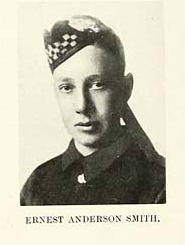 Private Smith’s OC wrote to his parents: “Your son fell in the thickest of the fight.” Private Smith was Dux of Morgan Academy in 1914, and medallist in Latin and German. He entered the University of St Andrews as third bursar and, during the short time he was an undergraduate, he gave great promise of a most successful university career.

Mr and Mrs R. Smith, 45 Baldovan Terrace, Dundee, have been notified of the death of their son, Private Ernest Smith, Argyll and Sutherland Highlanders.

Private Smith was a brilliant Student.  He received his education at the Morgan Academy, and in 1914 he was dux medallist there, while he also received gold medals for Latin and German.  He entered St Andrews University in the same year as third bursar and was awarded the Taylor Thomson Bursary of £50 per year for three years.  He enlisted in the Argyll and Sutherland Highlanders fully two years ago, and had been at the front for over a year.

Private Smith was an officer of the St Andrew’s Parish Church Company of the Dundee Battalion of the Boys’ Brigade.  A brother is serving at the front.

Can you tell us more about Ernest Anderson Smith? Some additional facts, a small story handed down through the family or perhaps a picture or an heirloom you can share online. Contact our curator...