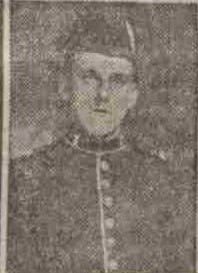 Francis has no known grave but is remembered in the Menin Gate Memorial.

Sill another man has died the death of a soldier.  The parents of Private Francis James Smith, 3rd Black Watch, who reside at 25 Watson’s Lane, Dundee, have received official intimation of the death of their son.  He was killed in action on 23d October.  Private Smith was in his twenty-second year, and before the war was employed by David T. Dewar, Ltd., hacklemakers, Old Glamis Road.  He was the eldest son of a blind father.

His parents have looked for a letter from him since his arrival in France, but all they received was a field service postcard until the communication which they would rather not have had, the intimation of his death.

Can you tell us more about Francis James Smith'? Some additional facts, a small story handed down through the family or perhaps a picture or an heirloom you can share online. Contact our curator...