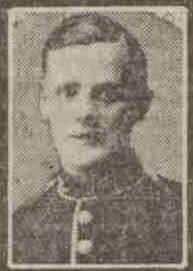 To the roll of Dundee men — and it is already not an inconsiderable one–who have laid down their lives for their country falls to be added the name of Private Alexander Soutar, of A Company, 2nd Royal Scots.

The sad news has reached his widowed mother, who resides at No 8 Littlejohn Street, that her son was killed in action on 15th October at Croix Barbée.  Private Soutar was 23 years of age.  He enlisted in the Royal Scots over two years ago, and prior to becoming a soldier he was employed in South Dudhope Works (Alex. Henderson & Sons).  Private Soutar had borne his full share of the fighting.  The Royal Scots was one of the first regiments to go to the front and from time to time Mrs Soutar received postcards from her son.  A few days before the gallant soldier met his death his mother sent off a parcel containing tobacco and other little comforts.  The days wore on, and no acknowledgment of his having received it came to hand.

“I wonder if Eck has got that tobacco,” Mrs Soutar kept repeating to herself, but all her joy of anticipating a letter from her son has been turned to deep grief by the receipt of the brief but fateful intelligence from the War Office that Alexander has been killed in action.  The loss of her son is a great blow to Mrs Soutar, who is a hard-working woman.

Can you tell us more about Alexander Soutar'? Some additional facts, a small story handed down through the family or perhaps a picture or an heirloom you can share online. Contact our curator...