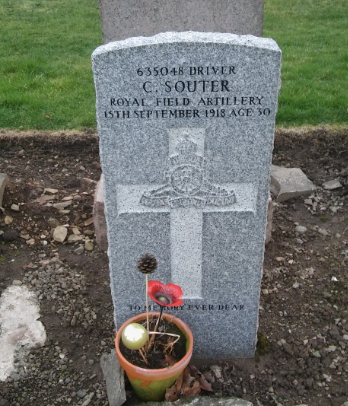 Information has been received that Driver Charles Souter, R.F.A., who formerly resided at 21 Hill Street, has died in a London Hospital from wounds received in action on 21st July.  Deceased, who was a member of the city battery for over ten years, was mobilised at the outbreak of war, and has been on active service for three-and-a-half years.  He was, prior to enlisting, employed as a carter with Messrs Mackay & Robbie, contractors, Dundee.  Driver Souter leaves a widow and four children.

Can you tell us more about Charles Souter? Some additional facts, a small story handed down through the family or perhaps a picture or an heirloom you can share online. Contact our curator...