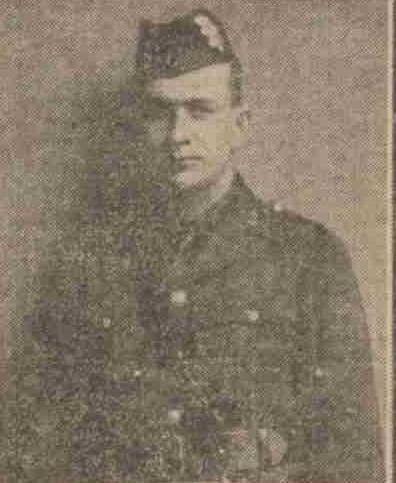 Frank has no known grave but is remembered on the Basra Memorial. He was the brother of Major Alexander Henderson Soutar M.C. 98th Field Company, Royal Engineers, who was killed in action 28.05.1918. his other brother Lt David Soutar also served during the Great War, he was a P.O.W. in Germany and returned home safely.

Frank Henderson Soutar was the son of the Reverend Alexander Soutar, and was ‘formerly of Springburn, Glasgow. He was for some time engaged in banking in Canada. He returned home about two years ago to join his uncles in business in Dundee. Shortly after the outbreak of the war he was granted a commission in the Black Watch, having previously undergone training in the O.T.C. The Rev. Mr. Soutar has two other sons serving in the Army’

Franks mother Mary was a native of Dundee.

SON OF A THURSO MINISTER.

A Dundee officer has lost his life in the fighting in Mesopotamia.  He is Second-Lieutenant Frank Henderson Soutar, 2d Black Watch, and prior to joining the army he was connected with the firm of Alex. Henderson & Sons, Limited, jute manufacturers, Dundee.

Lieutenant Soutar was one of three soldier sons of the Rev. Alex. Soutar, Thurso.  He was educated at the Miller Institute, Thurso, and afterwards came to Dundee, where he served his apprenticeship in the Clydesdale Bank.  Subsequently he proceeded to Canada, and while there held an important position in the Dominion Bank.

Lieutenant Soutar returned to this country about two years ago to learn the jute industry under his uncle, Mr William Henderson of West Park.  Following the outbreak of war, he joined the Inns of Court Officers’ Training Corps at London, and was five months later gazetted to the 3d Black Watch.  Afterwards he went out to France to be attached to the 2d Battalion, and proceeded with it when it was ordered to the East.

KILLED WHILE FIGHTING ON THE TIGRIS.

Official Intimation has been received of the death in action of Second-Lieutenant Frank Henderson Soutar, of the 2nd Black Watch.  The deceased officer was a son of the Rev. Alex. Soutar, Thurso, and a nephew of Mr William Henderson, West Park, Dundee.

He received his education at the Miller Institute, Thurso, and afterwards came to Dundee, where he served his apprenticeship in the Clydesdale Bank. Some time later however he emigrated to Canada, and joined the staff of the Dominion Bank, where he was employed for fully three years.  At the beginning of 1914 he returned to Dundee, and took up business with Messrs Alexander Henderson & Sons, Ltd., manufacturers, South Dudhope Works.  Shortly after the outbreak of war he joined the O.T.C. in London, and subsequently received a commission in the 3rd Black Watch.  He proceeded with his battalion to France, and after two months’ service there was transferred to Mesopotamia, and attached to the 2nd Black Watch.  He was 26 years of age.

Can you tell us more about Frank Henderson Soutar'? Some additional facts, a small story handed down through the family or perhaps a picture or an heirloom you can share online. Contact our curator...