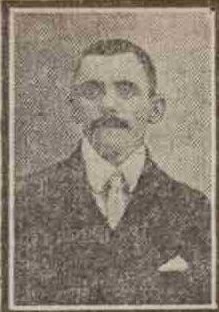 The death of Private Spelman, of the Royal Scots Fusiliers, is attendant with considerable pathos in that no communication has been received by the relatives other than the official intimation that he had died at a base hospital in France on 7th November.

Deceased, who was a reservist, resided with his brother at 61 Peddie Street, Dundee, and prior to the outbreak of war was a labourer in Blackness Foundry.  He served through the South African campaign, and came through it unscathed with a medal and three clasps to his credit.

On 31st October a postcard from Spelman was received by Mr Thomas Fyffe, 27 Bernard Street, which set forth that he had just been wounded in the lung, had been transferred to a base hospital in France, and that he hoped soon to be discharged.

It may be mentioned that Spelman’s father saw 21 years’ service in the army, and following that entered the Dundee Police Force, in which he served for a like number of years, when he was subsequently transferred to Perth Penitentiary as a warder.

Peter’s brother Matthew also served during the Great War and returned home safely. He had the service no 49010, and is believed to have served with the Northumberland Fusiliers.

Can you tell us more about Peter Spelman'? Some additional facts, a small story handed down through the family or perhaps a picture or an heirloom you can share online. Contact our curator...