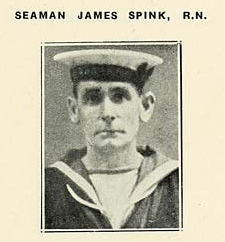 James has no known grave but is remembered on the Portsmouth Naval Memorial. He was serving aboard the George Milburn, built by Hall, Russell & Co., Aberdeen in 1916 and operated at the time of her loss by Royal Navy, was a British navy trawler of 235 tons.

On July 12th, 1917, George Milburn was sunk by a mine from the German submarine UC-42 (Otto Heinrich Tornow), off Waterford, 1.5 miles south of Dunmore Point. 11 persons were lost.

An Arbroath minesweeper, James Findlay Spink, a deck hand, lost his life at sea on 12th July.  Deceased leaves a widow and seven of a family, who reside at 22 John Street.

Can you tell us more about James Findlay Spink'? Some additional facts, a small story handed down through the family or perhaps a picture or an heirloom you can share online. Contact our curator...