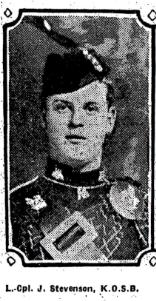 John has no known grave but is remembered on the Menin Gate Memorial. His father George was the Pipe Major for the Kings Own Scottish Borderers.

Can you tell us more about John Stevenson'? Some additional facts, a small story handed down through the family or perhaps a picture or an heirloom you can share online. Contact our curator...