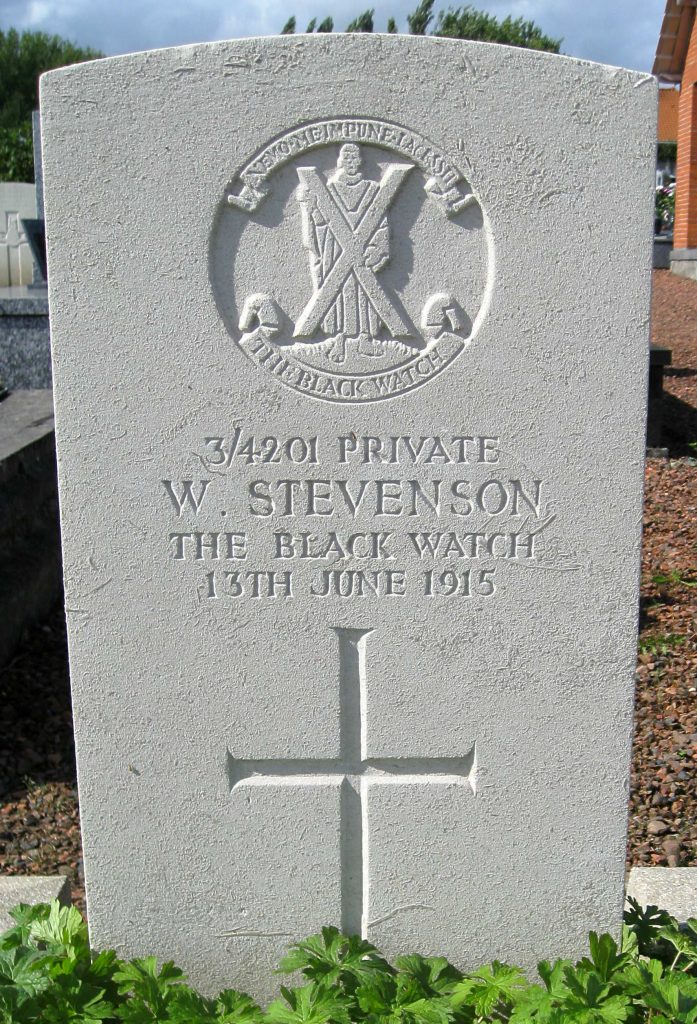 “A CHEERFUL AND GOOD SOLDIER.”

DUNDEE MAN KILLED BY A SNIPER.

A German sniper’s bullet has placed the wife and family of Private Wm. Stevenson, 1st Black Watch, in a melancholy plight.

Mrs Stevenson, who resides at 40 Watson’s Lane, Dundee, is the mother of five children.  The eldest is not yet twelve years of age, and the youngest is only eight months old.  Mrs Stevenson has received a letter from Lieutenant Hay, 1st Black Watch, telling her that her husband was shot dead by a sniper on 12th inst.

Lieutenant Hay states that Private Stevenson was about to enter on a spell of sentry duty when he was shot down.  The officer pays a simple but eloquent tribute to the dead private—“He was a cheerful and good soldier.”

Intimation of Private Stevenson’s death is also contained in a letter from Private Ben Kelly to Mr Joe Miller, Greenmarket, Dundee, with whom the deceased soldier was intimately acquainted.  Private Kelly states that Private Stevenson was killed by a German sniper, and the letter continues :–”He was looking over a trench when the bullet hit him a little above the right eye, travelling along the side of his head.  “He was dressed at once, and taken to a hospital.  He lingered till the following afternoon when he died, a hero, for his King and country.  He was always cheery and making jokes with everyone.”

Private Stevenson was probably better known to a large number of acquaintances in the city, and in the Greenmarket district particularly, as “Knipey Smith.”  He was 35 years of age, and carried on business as a general dealer.  For thirteen years Private Stevenson served in the Black Watch, in which he held the rank of sergeant.

When war threatened he rejoined the “Forty second.” And when hostilities opened he was transferred to Nigg, where he was until he went to the front eight weeks ago.  He was a Freemason, and belonged to Lodge Progress.

A half-brother, Trooper Thomas Anderson, 11th Hussars, 61 Wilkie’s Lane has been at the front since the month of August.

Can you tell us more about William Stevenson'? Some additional facts, a small story handed down through the family or perhaps a picture or an heirloom you can share online. Contact our curator...