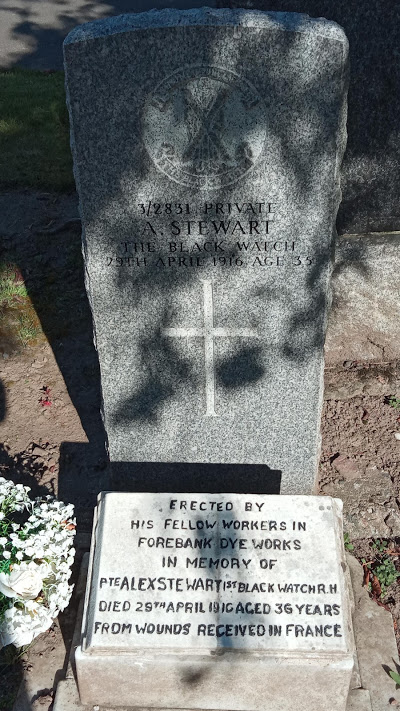 Alexander’s service record is yet another of those lost and unable to be found.  We know however that he was born in Brechin to parents David Stewart a General Labourer and Ann Ford a local factory worker

He moves to Dundee sometime later and is employed as a stone carrier when he marries Margaret Cox, a jute factory worker, at St Salvador’s Church on 30 Dec 1904.  Together over the ensuing few years they have 4 children William in 1905,  David in 1907,  Thomas in 1909 and James in 1914.

The absence of a service record makes it somewhat challenging to track his service pathway however his service number having the prefix “3” suggests he may have had some previous service as this number relates to the 3rd Reserve Bn based in Perth and this together with his posting to the Regular Army 1st Bn in January further supports this assumption.

At some stage thereafter he is medically evacuated home with serious kidney disease, described as Lardaceous Disease of the Kidneys,  This was known to be a degenerative form of Nephritis where the organ appears to have a waxy appearance and it is this condition which results in kidney failure and in his subsequent demise at Home on 29 April 1916.  His pension record card describes this as having started during his active service

An interesting feature is that on taking some photographs of his headstone earlier this week there is evidence that even with the passage of some 104 years, Alexander is still remembered.  There was a fresh Holly Wreath on his grave which must have been place there just a few weeks ago.  Also of interest is the white marble tablet laid by his work colleagues stating he died of wounds.  The fact that  his death was due to illness contracted during service rather than wounds is largely irrelevant as discharge from the service for either was list as “no longer fit for service”.

Can you tell us more about Alexander Stewart'? Some additional facts, a small story handed down through the family or perhaps a picture or an heirloom you can share online. Contact our curator...