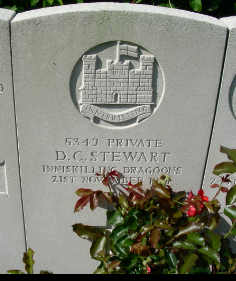 Duncan’s entry on the GWD RoH is one devoid of any story on which to build a picture of Duncan, his wider family or the story of his war.  Yet,   on pushing a little bit of directed enquiry there are a couple of interesting twists and turns to his overall story

Duncan is said to have been born in Coupar Angus yet there appears to be no readily available record of this, but this may be that we simply haven’t yet found his entry in a register of births. We do know that he enlisted in Edinburgh and that his family lived in Dundee and prior to his service he was employed as a Grocer.  He actually enlisted to the Regular Army in October 1904 specifically to the 6th Inniskilling Dragoons and his enlistment papers also tell us that he had some previous,  presumably Volunteer service,  with the Black Watch.  From this we might assume he had enjoyed the military aspect of his volunteer service to an extent that he was willing to undergo full time Regular Service albeit this time to a Cavalry Regiment rather than an Infantry Bn.  Duncan completed his full time service in October 1907 with a character grading of “Very Good” and he subsequently was placed on the Reserve.

When war was declared, being a reservist, Duncan was immediately recalled to the Colours but the 6th Inniskilling Dragoons were now serving in India as part of the Mhow Cavalry Brigade of the 1st Indian Cavalry Division.   Thus it was that Duncan was mobilised to the 6th Dragoons, (Carabiniers) and with them he deployed to the initial BEF in 1914 as part of 4 Cavalry Brigade of the Cavalry Division of the BEF.  The Cavalry Division were amongst the first to lock swords with the enemy during the very stoical and brave fight put up by the BEF from Mons,  Aisne, Marne and Ypres.  It was during the fighting around Ypres that Duncan met his fate.

During the period October / November 1914 the 6th Dragoons, (Carabiniers), were at Steenbecque around 10th October;  La Clytte, 16th Oct; Messines 18th October:  Wytschaete 24th October; Wulverghem 8th November; Bailleul 12 November and in the period of 20 -24 November they were in the trenches adjacent the Kemmel – Wytschaete Road and it was here on the 21 Nov 1914 that Duncan is said to have been wounded and subsequently dying of those wounds at Poperinge

An interesting twist to his story is that whilst he has a grave marker in Poperinge Old Military Cemetery he was,  or perhaps still is,   listed on the Menin  Gate is attached of his Headstone and by taking a look at his CWGC entry you can see a panel list from when he was listed on Menin Gate

Can you tell us more about Duncan Campbell Stewart'? Some additional facts, a small story handed down through the family or perhaps a picture or an heirloom you can share online. Contact our curator...