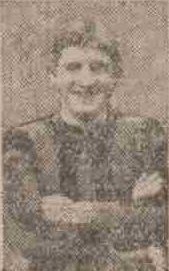 Mrs Stewart, 41 Cobden Street, Lochee, has been informed that her husband, Private David Smith Stewart, Black Watch, was killed in action on 26th April.  Deceased, who was 27 years of age, was a well-known football player in junior teams in Lochee, being connected with the Fernbank and Renton teams, while he was also a member of the battalion football team.  He joined the colours shortly after the outbreak of war, and was previously employed in Camperdown Jute Works.

Can you tell us more about David Smith Stewart'? Some additional facts, a small story handed down through the family or perhaps a picture or an heirloom you can share online. Contact our curator...