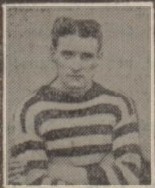 VIVID DESCRIPTION OF LIFE IN THE TRENCHES.

The sad news was yesterday conveyed to his wife, who is at present residing with his mother at 16 Nelson Street, Dundee.  The notification stated that Private Stewart was killed in action on 21st October.

Private Stewart was formerly employed with John Boyd, hairdresser, 10 Thorter Row, but a year or two ago he married and took up residence in Glasgow, where he had a business of his own in Maxwell Street.

Three days before his death Private Stewart wrote home stating that he was quite well.  He says :–“I had a very narrow escape a few days ago.  One of the German bullets snipped out a piece of my jacket over the right breast.  If it had been a inch farther forward it would have been right through me.  On the day before I just missed another by about a foot.  It was getting hot, I can tell you.  We put in a terrible time in our last trenches.  There were not many killed or wounded, but the bullets and shells were always falling.  We had to keep well down under cover.  We are driving the Germans back, and the Russians are coming on the other side of the frontier.  This war may last a long time, and it may stop soon.”

Private Stewart is survived by a widow and two young children.

Can you tell us more about Hugh Stewart'? Some additional facts, a small story handed down through the family or perhaps a picture or an heirloom you can share online. Contact our curator...