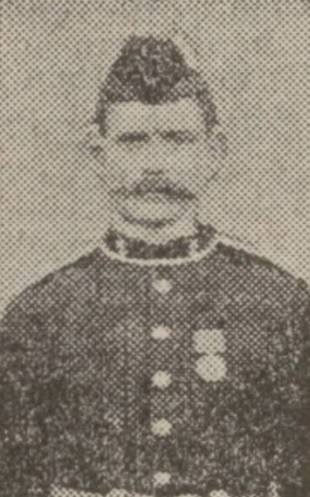 While Christmas 1914 has become synonymous with the truce, one Dundee soldier lost his life early that morning. 3-2787 Pte. Isaac Stewart, a veteran of the Boer War, having served in the 1st Black Watch for over 18 years, was the only man of the battalion to be killed that day, before it was relieved by the Coldstream Guards. Born in Lochee, Isaac was working as a miner in Lochgelly when he insisted on rejoining his regiment. He is buried in Brown’s Road Military Cemetery, Festubert, Pas de Calais, France, V. B. 2.

LOCHGELLY SOLDIER KILLED IN ACTION. A SELF-SACRIFICING MAN. Private Isaac Stewart, of the 1st Black Watch, a Lochee soldier, was killed in action on 25th December last. Information of his death has been received by Miss Jessie Mansfield, 34 Kirk Street, Lochee. Private Stewart joined the army when he was 17 years of age, and served in the Black Watch for 18½ years, 11 of them being spent in India. He went through the whole of the Boer War without injury, and held two medals and bars for that campaign.
On the outbreak of the great European war, Private Stewart was working in Lochgelly as a miner. He was making good wages, but that, and the fact that he had a life pension from the army did not deter him from resigning his employment and re-enlisting in his old regiment. To those who suggested that he should wait for a while, Private Stewart replied that he would not shrink from his duty, and nobody could say to him that he stayed behind. He was 38 years of age. A man of fine physique, Private Stewart took a prominent part in regimental athletics, and was noted as a swimmer and a football player. Private Stewart had been looking forward to getting a few days’ leave from the front, and during the brief period of home he intended to be married. The Fifeshire Advertiser, Saturday, 6 March 1915, 2

Can you tell us more about Isaac Stewart'? Some additional facts, a small story handed down through the family or perhaps a picture or an heirloom you can share online. Contact our curator...