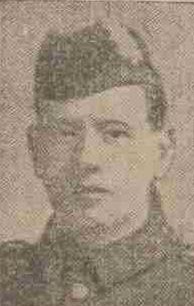 Sergeant Herbert C. Stirton, a Dundee soldier, has died of wounds received on the 4th inst.  Mr and Mrs Andrew Stirton the deceased’s parents, who reside at 274 Blackness Road, Dundee, received official notification about a week ago that their son was dangerously wounded.  Mrs Stirton has since been in France to see her son, and he passed away while she was present.

Previous to enlisting about two years ago Sergeant Stirton was in the employment of Messrs Larg & Sons, music sellers, Whitehall Street, Dundee.  He took a great interest in various forms of sport, and was a prominent member of the Belmont Swimming Club.  He was 26 years of age, and was a young man of very bright and genial disposition.

Mr and Mrs Stirton have a son still at the front with the Argyll and Sutherland Highlanders.

Can you tell us more about Herbert Cox Stirton'? Some additional facts, a small story handed down through the family or perhaps a picture or an heirloom you can share online. Contact our curator...