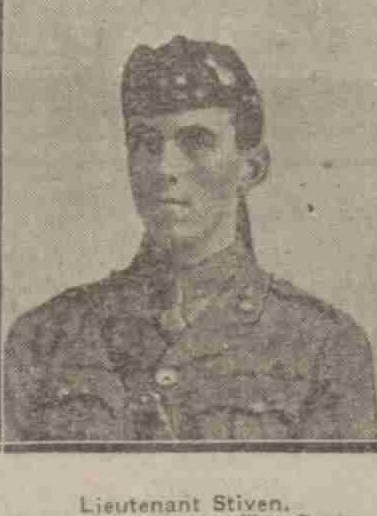 Lieutenant Albert Stiven, Royal Scots Fusiliers, younger son of Mr David R. Stiven Fir Neuk, Blackness Road, Dundee, has been killed in action.  Lieutenant Stiven, who was 19 years of age, was educated at Harris Academy, and was employed with Messrs McIntyre & Rae, chartered accountants, Reform Street.  He enlisted along with his companion, Lieutenant Douglas C. Ferguson, who was killed two days after his friend, in the Artists’ Rifles in November, 1915, and after a course of training received a commission in the Royal Scots Fusiliers.  He had been at the front since October Last.

Can you tell us more about Albert Stiven'? Some additional facts, a small story handed down through the family or perhaps a picture or an heirloom you can share online. Contact our curator...