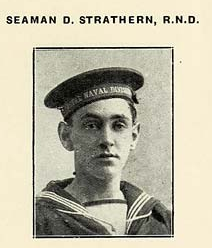 David has no known grave but is remembered on the Helles Memorial.

David Strathern was the son of David Strathern, Grocer, Dundee, and grandson of David Bell, woollen manufacturer, Helen St, Arbroath. He was serving his apprenticeship as an engineer, and was not quite 19 years of age when he enlisted in the Royal Naval Division in November 1914. He was promoted leading-seaman, and was afterwards appointed head scout for the Collingwood Battalion on their leaving fro the Dardanelles Campaign. During service there he was killed in action on the 4th of June 1915. Arbroath Roll of Honour, page 27.

David is also remembered on the War Memorial in Strathmartine Parish Church.

DUNDEE MEMBER OF THE COLLINGWOOD BATTALION

Leading Seaman David B. Strathern, son of Mr D. Strathern, grocer, 28 Lorimer Street, Dundee, is now presumed to have been killed in action during the Gallipoli operations.

He was posted missing from the 4th June of last year.  Deceased, who was scarcely nineteen, enlisted in the Royal Naval Division shortly after the outbreak of war, and became attached to the Collingwood Battalion.  He was a former pupil of the Morgan Academy, and was in the course of serving his apprenticeship to the engineering trade with D. J. Macdonald when he answered the call to arms.  Deceased was also a student at the Technical College, and had taken several certificates in engineering.

Can you tell us more about David Bell Strathern'? Some additional facts, a small story handed down through the family or perhaps a picture or an heirloom you can share online. Contact our curator...