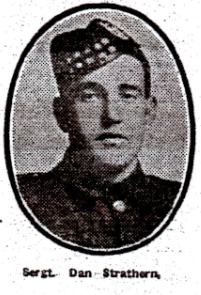 Daniel has no known grave but is remembered on the Thiepval Memorial.

Daniel was 25 years old when he enlisted on 30 December 1914and was enlisted to the Gordon Highlanders.  Prior to enlistment he was employed as a postman and resident with his mother at 47 North Wellington Street Dundee.

He arrives at the Depot and training Battalion Gordon Highlanders in Aberdeen on 6 Jan 1915 and his service record suggests he was a very proficient recruit and soldier in that he is promoted to LCpl  then Cpl and A/Sgt in the 3rd Res Bn before being posted to a Battalion in the BEF.  He embarks for the BEF from Southampton in June 1915 and reverts to his substantive rank of Pte on posting to the Regular Army 1st Bn Gordons in the BEF on 22 June 1915.  Again it would appear that his abilities as a soldier are well recognised as he again ascends the rank structure from Lcpl to Cpl and then subsequently again to Sergeant within the 1st Bn.  This may be more notable given the fact that the 1st Bn would certainly have retained at least a baseline cadre of regular army soldiers within their ranks and for a volunteer with no previous military experience prior to the War to ascend so successfully suggests considerable soldierly and leadership qualities.

Throughout the period of Daniels service in the Bn in 1915 they were located in the Ypres Salient as part of Initially 8 Bde of 3rd Div. and later 76th Bde of the same Division and they saw much in the way of trench fighting in and around Hooge with intermittent periods in Billets in Brandhoek and Vlamertinge.   In early 1916 they were still in the Salient,  now varying between trenches in St Eloi,  Kemmel and billets in Reninghelst South of Brandhoek

In June 1916 the Bn moved to Billets near Houlle,  close to St Omer from where in July they entrained for Doullens to augment losses in the initial days of the Battle of the Somme and it was from here that the Bn moved forward in August 1916 in the lead up to Battle for Guillemont where their objective was to take  ground including a sunken road stretching from Maltz Horn Ravine Farm to Guillemont.  In this action between17th and 20th August the Bn  War Diary tells us that the Battalion suffered significant losses amounting to 5 officers killed or Died of Wounds a further 2 officers wounded and some 254 Other ranks killed,   wounded or missing,  Daniel amongst this number

Interesting features from Daniel service record are not only the rate of promotions but also the fact that leave and hospitalisations are recorded and it seems a little unfortunate that on the first day of a leave period he is recorded as admitted to Dundee War Hospital,  (Dundee Royal Infirmary),  suffering from Boils,  a malady that would seem to trouble him thereafter as he is subsequently admitted to a Field Ambulance and a CCS suffering the same.  Given the conditions of trench life in the Ypres Salient together with the infestation of lice and other parasites it is not surprising that he would suffer such maladies.

Can you tell us more about Daniel McLennan Strathern'? Some additional facts, a small story handed down through the family or perhaps a picture or an heirloom you can share online. Contact our curator...