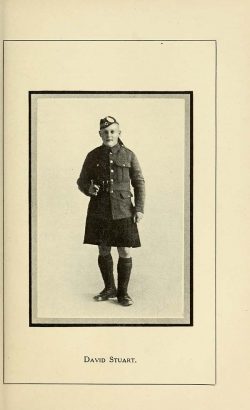 His siblings were Helen, Charlotte and Charles.

David began his employment with Caxton House as an apprentice compositor on 14 June 1915. After having received his schooling at Balfour Street Public School, he worked some little time with Band & Whyte and with George E. Findlay. He was delighted with the printing trade; his heart and soul were in his work, and he used to tell his father and mother about the men who worked around him.

Davie loved to spend his leisure time in helping his father with the tending of his plot at the Kinnaird Gardens. As he was also interested in music, his father, a musician by profession, was giving him piano lessons. On Saturday afternoons he attended the musters of the 19th Company, Boys’ Brigade, and on Sunday evenings he was never absent from the Young Men’s Bible Class at the YMCA.

The Great War interrupted David’s life and the idea of becoming a soldier was something which had never entered into his mind. The thought of war was utterly repugnant to him but to did not intend to be taken away as a conscript. ” I’ll join first,” he told his father and mother. So on 5 June 1916, Davie, in the company of his father, presented himself at the Albert Hall as ready and willing to do his duty, even to go to war. There was a crowd of applicants at the Hall that day, for the lads were hastening to enrol themselves as voluntary soldiers. The father and son, therefore, had to wait their turn from 2pm till after 4, when Davie was hurriedly examined and classified as an A1 man. He received in his hand 2s.9d. for one day’s pay and ration money. He swore loyalty to the service of the King, and he now knew that he belonged to the British Army.

For the time being Davie was free to return to his home and his work, but he lived now in daily expectation of being called up for service. At last the notice arrived, and Davie again presented himself at the Albert Hall. He joined the Argyll and Sutherland Highlanders, as at that time only the infantry regiments were open for recruits, and on 26 January 1917 at 10.40am, he left for Stirling, the headquarters of his regiment.

Davie was a good correspondent. Omitted in general from the extracts, is the utmost solicitude for his family’s welfare and happiness. In every letter he inquires anxiously about his father’s health, and constantly urges him to hope­fulness and good cheer. In every letter he expresses his loving affection to his mother, to his sisters Lottie and Nellie, and to his little brother Charlie.

Davie got his first leave on 26 May, and he came to see all his old friends. He said but little about his experiences in the army, but to his mother he spoke out freely. “Ach, mother,” he said, “I dinna like it. I wish I was hame.” Back to Redford Barracks at Edinburgh, however, his duty called him.

In due course, Davie got “expeditionary leave” and he was in Dundee from 3 to 8 November. When he left his home for the last time, he did his best to soften the wrench of parting with his father, who was then confined to the house with illness. “Cheer up, father, I’ll be back again – next week!” And at the railway station he tried again to cheer his mother. “Never mind, mother, cheer up. I’ll be back again – next week!” This was the last that these parents saw him.

To a workmate in the first week of September 1918, he wrote a note saying that he had not received a parcel that had been sent out; saying also that they had just received word that there was a “stunt” coming off, and that when he got out of it perhaps his parcel would be waiting him. From a letter written on the 19th September by one of his platoon chums it was learned that the parcel had arrived, but, Davie was not there to claim it.

In the lists of the men reported as wounded and missing on 19th September 1918 appeared the name “David Stuart, 18596.”

David was last seen badly wounded in one arm lying on a portion of the battle­field of which the Bulgars subsequently gained possession for a short time, but still long enough for them to carry off several men as prisoners. An exhaustive search of the battlefield was made after, and no trace of Davie was found, although it was hoped that he might be in a Bulgar hospital.

He was never seen again. One of his comrades came home in course of time, and he related to the grief-stricken parents that he was present when Davie was wounded in the arm. The wound was tied up by one of the Red Cross men, but darkness came down suddenly, and it was found necessary to leave Davie lying on the ground. The boy himself urged his comrades to go. “Never mind me, boys,” he said, “I’ll be all right”.

He was posted as missing, presumed killed in action on 19 September 1918, age ., and is buried in Doiran Military Cemetery.

Can you tell us more about David Brown Stuart'? Some additional facts, a small story handed down through the family or perhaps a picture or an heirloom you can share online. Contact our curator...