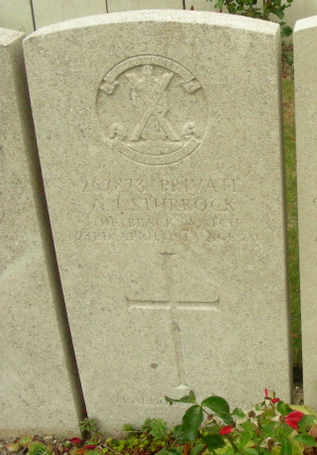 Arthur was the brother of Pte Lawrence James Sturrock S/17407, of the 7th Battalion, Seaforth Highlanders, killed in action 09.04.1917.

Another son of Mr R. F. Sturrock, Braemount, Albany Terrace, Dundee, has been killed.  Last week Mr Sturrock was notified of the death of his elder son, Private Laurence James Sturrock of the Seaforth Highlanders.  Yesterday the intelligence was conveyed to him that his younger son, Private Arthur Sturrock, who was serving with the Black Watch, had also made the supreme sacrifice.

Deceased, who was an old Harris Academy boy, met his death on 23d inst., only a fortnight after his eldest brother fell.  Private Sturrock was only eighteen years of age, and was formerly employed in the office of Messrs Low & Bonar.  He enlisted about a year ago.

Can you tell us more about Arthur John Sturrock'? Some additional facts, a small story handed down through the family or perhaps a picture or an heirloom you can share online. Contact our curator...