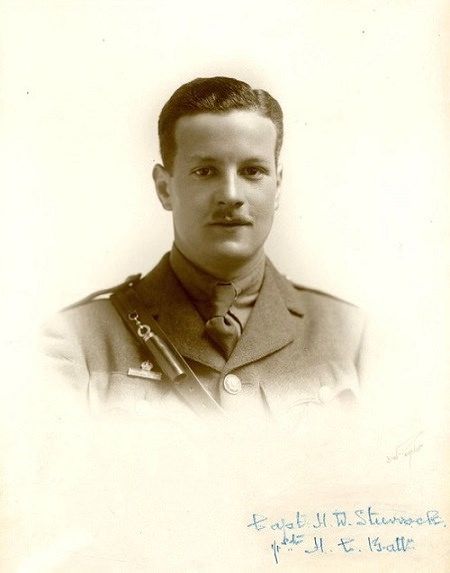 Second-Lieutenant Harry Douglas Sturrock, Highland Cyclist Battalion, for conspicuous gallantry in action.  He led his platoon with great dash into enemy’s support line.  Finally, through badly wounded in the head, he succeeded in carrying back a private who was too badly wounded to get on by himself.

Much regret will be expressed in Dundee and surrounding district at the announcement of the death of Captain Harry Sturrock M.C., of the H.C.B., youngest son of Mr Alexander Sturrock gymnastic instructor, Rock-Ard, Wormit, which took place early yesterday morning at Dundee.

The  gallant officer was amongst the first of the young men in Wormit to enlist at the outbreak of war, and was attached to the transport section of the H.C.B.  Being transferred to the Royal Warwicks, he proceeded on active service, where his fearless and courageous conduct was rewarded by receiving the Military Cross from the King.  He received a severe bullet wound in the head, which necessitated his being sent home.  His apparent recovery was rapid, but latterly septic poisoning set in, with the result as stated.

The late Captain was educated at the High School, Dundee, and previous to enlisting was a draughtsman at Lilybank Foundry.  He was 23 years of age.

Can you tell us more about Harry Douglas Sturrock'? Some additional facts, a small story handed down through the family or perhaps a picture or an heirloom you can share online. Contact our curator...