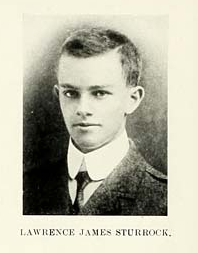 Dundee has lost one of its promising sons by the death of Private Laurence James Sturrock, Seaforth Highlanders, the elder son of Mr and Mrs R. F. Sturrock, 9 Albany Terrace, Dundee.  Intimation has been received by his parents that he was killed in the recent severe fighting.

Private Sturrock, who was 23 years of age, received his early education at the Harris Academy being one of the Gold Medallists of that school.  He proceeded to St Andrews University, where he graduated with honours in mathematics and natural philosophy in 1915.

Private Sturrock had been in France since the beginning of the year.

Can you tell us more about Lawrence James Sturrock'? Some additional facts, a small story handed down through the family or perhaps a picture or an heirloom you can share online. Contact our curator...