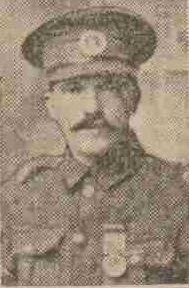 Official intimation has been received of the death from wounds of Corporal  Sturrock, of the South African Infantry, the eldest son of Mr David Sturrock, 21 Lorimer Street, Dundee. Corporal Sturrock had seen a lot of active military service.  As a member of Baden Powell’s Police, he took part in the Boer war, for which he held the medal with several bars, and in the present campaign he had also taken part in operations in German West Africa.  He was a widower, and by his death three children, who reside in South Africa have been orphaned.  Before he went to South Africa Corporal Sturrock was in the employment of Mr James Young, butcher, and latterly acted as a vanman for Stevenson Brothers.

Can you tell us more about Peter Sturrock'? Some additional facts, a small story handed down through the family or perhaps a picture or an heirloom you can share online. Contact our curator...