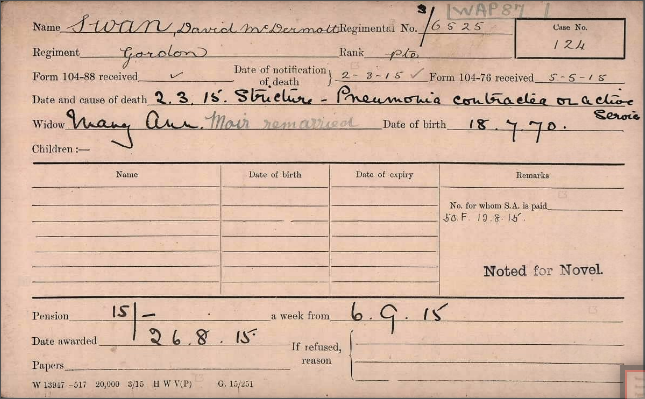 The death of Private David Swan, 2d Gordon Highlanders, a Kirkcaldy soldier, at Aberdeen, recalls a remarkable incident in the hero’s career.

At Ypres a shell exploded opposite the trench in which Swan was stationed, and so great was the explosion that the whole trench was shattered, and Private Swan was buried in the debris.  He might have been left to a dreadful fate had not a comrade noticed his plight, and on an officer bring informed the wreckage was removed and Private Swan extricated.

His comrades worked under heavy shell fire.  On examination at the base hospital Swan was found to be paralysed right down the left side.  He was sent back to England to recuperate.

His troubles were by no means over even while on board the transport, for while crossing the Channel the weather experienced was severe, and during a heavy roll Private Swan was precipitated from his bunk to the floor and knocked unconscious.

Great was his surprise on coming to himself to find that the shock had removed his paralysis.

After a short stay at Aberdeen he paid a short visit to his people at Kirkcaldy, and on that occasion told the “Courier” of his remarkable experiences.  He spoke with pride of the part his family had taken in the war—two brothers are at present serving with the colours—and was most optimistic as to the result of the work in Belgium.  He was well known in Kirkcaldy, and great sympathy is felt for his parents.

Private Swan, on his return to Aberdeen, contracted bronchitis, which proved fatal.  He was interred with military honours.

Can you tell us more about David McDermott Swan'? Some additional facts, a small story handed down through the family or perhaps a picture or an heirloom you can share online. Contact our curator...