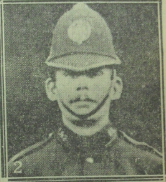 Sergt. Jas Swan a Dundee reservist, was yesterday reported killed.  Swan who was 32 years of age, had served in the 1st Black Watch, with several years’ Indian service, and, called up, he left for the Continent with the First Expeditionary Force.  He was wounded twice early in the campaign, but was unable to get home, and the intimation of his death comes in a letter from Mr A. L. Helps, the chaplain attached to the First Casualty Clearing Station.

The letter, which is dated 11th May is as follows :–“I deeply regret to say that your son, Sergeant John Swan , was brought to this clearing station yesterday night severely wounded.  In spite of the best medical attention he passed away.  Happily, he was in no pain, and died quite peacefully.  I buried him in the British Cemetery in the village of Chocques, North France.”

The late sergeant was a brother of Sergt. William Swan, who gained the D.C.M. for distinguished conduct at Givenchy.  Both sergeants were in C Company of the 1st Battalion, and Sergeant William is now in Melun Hospital suffering from wounds in the arm.  The deceased was a member of the Glasgow police force.  His mother resides at 25 Lorimer Street, Dundee.

Can you tell us more about John Swan'? Some additional facts, a small story handed down through the family or perhaps a picture or an heirloom you can share online. Contact our curator...