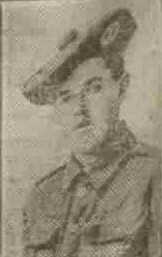 Mrs D. Taylor, 2 Sibbald Street, Dundee, has been informed that her son, Pte. William Taylor, Seaforth Highlanders, died of gunshot wounds in the head on 27th October last.  A chaplain states that Pte. Taylor was wounded during an attack south of Valenciennes.  Pte. Taylor was buried in the British Military Cemetery at Etaples.  He joined the army in March, 1916, went to France in March 1917, and was wounded in October of that year.  He was 24 years of age.

Can you tell us more about William Livie Taylor'? Some additional facts, a small story handed down through the family or perhaps a picture or an heirloom you can share online. Contact our curator...