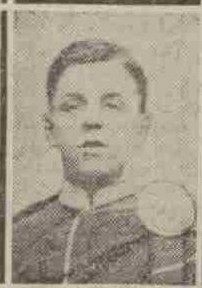 DUNDEE AN DIES FROM WOUNDS

HE RECEIVES IN BATTLE OF AISNE.

Mrs Tennant, 14 Annfield Street, Dundee, has received official intimation that her son, Private David Tennant, of the H.L.I., died in a French Hospital on the 27th September from wounds received in the battle of the Aisne seven days previous.

Along with the intimation of his death Mrs Tennant received the following letter from her son, marked “Dictated.” and which was posted on the day he fell :–“I was wounded on September 20, and have been brought into hospital.  I am feeling as well as can be expected, for I am in good hands.  Please remember me to all my friends.”

Private Tennant, who was 21 years of age, had served about eighteen months with the colours.  He was previously employed in the Dundee City Tramways as a conductor.  Mrs Tennant, who is a widow, has a son in the 4th Battalion Black Watch Territorials, and another serving with the Royal Field Artillery Territorial unit.

Can you tell us more about David Tennant'? Some additional facts, a small story handed down through the family or perhaps a picture or an heirloom you can share online. Contact our curator...