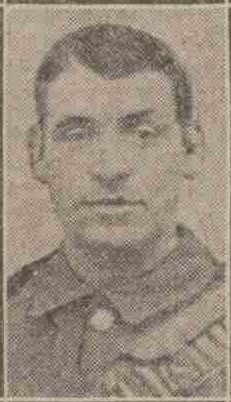 Alexander has no known grave but is remembered on the La Ferte Memorial.

Mrs Alex. Testard, residing in Fifteenth Street, Bowhill, Auchterderran, received intimation from the War Office yesterday that her husband, Private Alexander Testard, No. 7647 Royal Scots Fusiliers, was killed in action on September 22.  Testard was a reservist, and his time would have expired in a few months.  He was called up when war first broke out, and his last letter to his wife was two days before he was killed, in which he said he was well and getting on admirably.

Both Testard and his wife belong to Dundee.  Mrs Testard’s parents residing at 48 Kemback Street.  They have resided in Auchterderran district for a long time, Testard being employed as a miner at Bowhill Colliery.

He leaves a widow and two young children.

It is a sweet and proper thing, says the Roman poet, to die for one’s country, and such is the only consolation for the afflicted relatives of heroes such as Private Alex. Testard, Royal Scots Fusiliers, who has been killed in action.  He was a reservist, and left his home at 27 Fifteenth Street, Bowhill, at the beginning of the war.  Testard was a native of Dundee, and enlisted there some years ago.  He had many friends there and at Bowhill, who will miss him sorely.

Can you tell us more about Alexander Testard'? Some additional facts, a small story handed down through the family or perhaps a picture or an heirloom you can share online. Contact our curator...