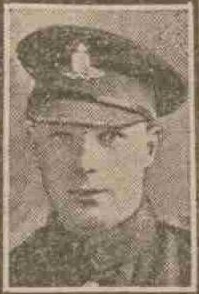 Bom. David Thom, R.F.A., was the eldest son of Pte. David Thom, Black Watch, whose home is at 131 Ann Street.  Bombr. Thom, who was 23 years of age, and was formerly employed as a vanman with Mr James Durkie, baker, Stobswell, took a prominent part in athletics.  He was mobilised in 1914, being a reservist, and went directly to France.  Deceased had been twice wounded.  His father took part in the South African War, and re-enlisted in November, 1914.

Can you tell us more about David Thom'? Some additional facts, a small story handed down through the family or perhaps a picture or an heirloom you can share online. Contact our curator...