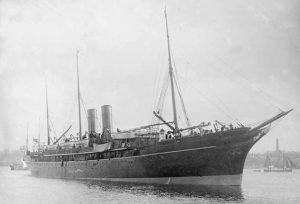 Walter has no known grave but is remembered on the Portsmouth Naval Memorial. He was the son of William Bruce Thompson C.B.E., J.P. and Hannah Ogilvie Thompson of Dundee.

S.S. Atrato was a beautifully designed passenger ship, more resembling a luxury yacht than a liner. She was used in the service between England and the West Indies and could carry up to 280 passengers. Bought by Viking Cruising Co. Ltd. in 1912, she was renamed Viking.

At the beginning of WWI, she was requisitioned by the Admiralty, equipped with armament and renamed H.M.S. Viknor. She was mainly used as a cruising patrol ship.

On 13th January 1915, while on patrol, she sank in heavy weather without any distress call. It was assumed that she was sunk by a mine, belonging to a minefield laid by the Germans. Not a single soul of the 295 crew was saved. Many of the bodies were washed ashore days after the sinking.

H.M.S. Viknor was lost of Torry Island in an area recently mined by the Germans on 13.01.1915. She was a 5386 Ton Blue Star Line Ship, formally the Viking. She was requisitioned by the Royal Navy as an armed Merchant Cruiser, she was part of the 10th Cruiser Squadron blocking the seas between the North of Scotland and Iceland.

DUNDEE ENGINEER ON BOARD THE WRECKED CRUISER VIKNOR.

It will be learned with deep regret in Dundee that one of the crew of the lost Viknor was Mr Walter D. Thompson, youngest son of Mr W. B. Thompson, of the Caledon Shipbuilding and Engineering Co.

Mr Thompson, who was 38 years of age, joined the navy in November last, and was appointed as an engine-room artificer on board the Viknor.  He was trained as an engineer in Dundee, and was for some time at sea as a marine engineer.  Prior to volunteering for service, he was under-manager in the Caledon Shipbuilding Yard.

Can you tell us more about Walter Dempster Thompson'? Some additional facts, a small story handed down through the family or perhaps a picture or an heirloom you can share online. Contact our curator...