We need you to tell us more about the life and times of David B. Thomson 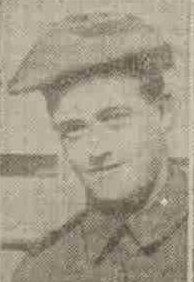 More about David B. Thomson

Official intimation was received in Dundee yesterday that Company-Sergeant-Major, David Thomson, Black Watch, who has been reported missing, is now taken as having been killed in action.

Company-Sergeant-Major Thomson is a son of Mr James Thomson, 62 Lilybank Road, Dundee.  He was reported missing after the memorable charge by “Dundee’s Own,” but hopes were entertained by his relatives that he had been taken prisoner.  Company-Sergeant-Major Thomson, who was 23 years of age, was in the Black Watch for about five years previous to the outbreak of war, and was sent to France with the first draft.  Before the commencement of hostilities, he was employed in the factory of Messrs Baxter Brothers & Co., Dundee.  He leaves a widow, who resides with her mother at 79 King Street.

Can you tell us more about David B. Thomson'? Some additional facts, a small story handed down through the family or perhaps a picture or an heirloom you can share online. Contact our curator...