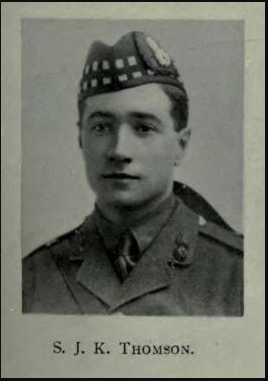 Sydney was the son of Mrs & Mrs John Kerr Thomson of Dundee. He joined the Public Schools Battalion in September 1914, received his commission in February 1915 and went to France in June.

Second-Lieutenant Sydney J. K. Thomson, a member of the firm of Thomson Bros., Angus Jute Works, Dundee, has died of wounds in hospital in Boulogne.  The deceased officer, who was 27 years of age, was the only surviving son of Mrs J. K. Thomson, 3 Somerville Place, Dundee.  He was educated at Loretto, and graduated B.Sc. in engineering at Edinburgh University.  On the outbreak of war, he enlisted in the Public Schools Battalion, and after five months received his commission in the Special Reserve of the Royal Scots Fusiliers.  He had been on active service in France for nearly four months as machine gun officer with the 1st Battalion.

Can you tell us more about Sydney James Kerr Thomson'? Some additional facts, a small story handed down through the family or perhaps a picture or an heirloom you can share online. Contact our curator...