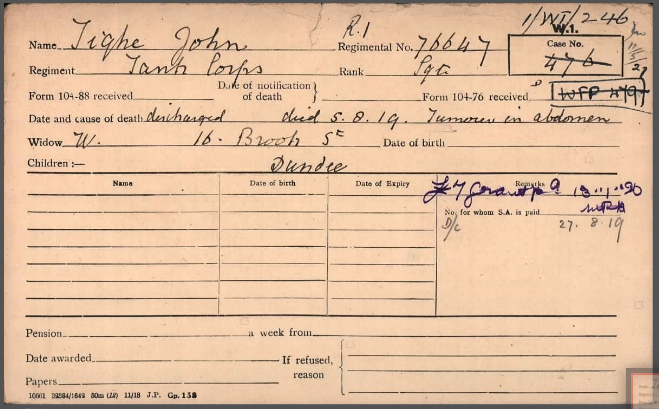 John initially joined the Kings Own Scottish Borderers 10.08.1904, Reg No 8935, initially signing up for 3 years army service & 9 years in the reserve but extended his service and completed 7 years service. He was re-engaged in the army in 1912 and was mobilised for war with the K.O.S.B. 05.08.1914. He transferred  to the Machine Gun Corps at some point before transferring to the Tank Corps 26.08.1917. He was discharged from the Army 14.01.1919 as being medically unfit due to suffering from Sarcoma, this illness was attributed to his war service. John is believed to have died in 1919 from his illness.

Can you tell us more about John Tighe'? Some additional facts, a small story handed down through the family or perhaps a picture or an heirloom you can share online. Contact our curator...