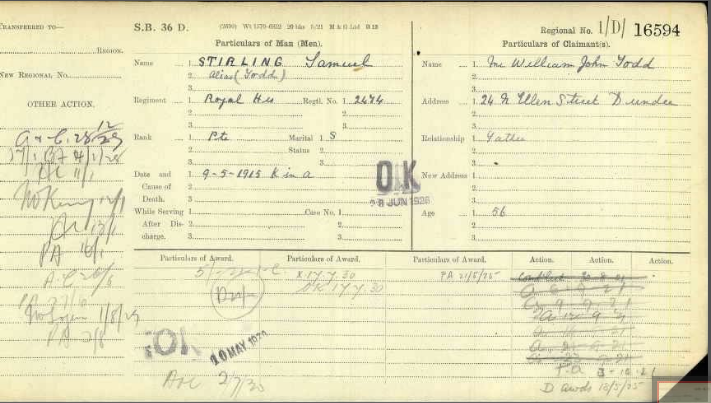 There is no Samuel Todd, Black Watch listed on either C.W.G.C. or S.D.G.W. He is listed as Sam Stirling on both these sites

Pte Samuel Todd, 2nd Battalion Black Watch listed in the Arbroath Roll of Honour. It is stated that, “He was the son of William Todd, factory worker, South Grimsby, Arbroath. He was twenty four years of age and had been a member of the 1st Black watch for nearly four years, but had later been transferred to the 2nd. He was killed on the 9th May 1915.” (Arbroath Roll of Honour, page 37)

A GALLANT BUT COSTLY CHARGE.

Private G. Stirling, 2nd Black Watch, whose relatives reside at 23 Powrie Place, Dundee, have received intimation in which it is stated that he is believed killed.  A chaplain writes :– “I regret to intimate that Private G. Stirling is reported missing, and is believed to be killed.  On the afternoon of 9th May his battalion took part in a gallant but costly charge.  The men had heroically climbed over the parapet of the trench, and had charged bravely in spite of losses, but were cut down by heavy fire before they had gone 20 yards.  There is every reason to believe your friend died in that attack.  The losses were great on that day, but it is a consolation to friends that the men fell in the noble service of their country, among brave comrades, in a heroic action.”  Deceased who was 23 years of age, had been about three years with the colours.

Can you tell us more about Samuel Todd'? Some additional facts, a small story handed down through the family or perhaps a picture or an heirloom you can share online. Contact our curator...