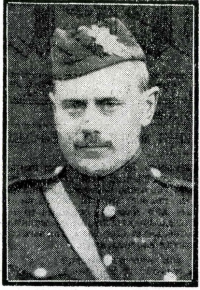 Major Emslie Tosh had previously seen action with the Dundee Volunteers in the South African War, 1899-1902, where he was awarded the Queen’s South African Medal with four clasps.

Tosh was also a trustee of his own church, St Margaret’s, Barnhill, where he is named on the 1914-1918 War Memorial.

George Elmslie Tosh was born on the 22nd January 1872 in Dundee. George – known as Elmslie – was the son of Alexander and Mary, and he had two younger sisters, Florence and Isabella. Elmslie was educated at Dundee High School.

Emslie was involved with the Volunteer and Territorial Movement in Dundee, and during the Boer war served as a trooper in the Natal Mounted Police, and as a Lieutenant with the 1st Volunteer Brigade of the Royal Highlanders. He was awarded the Queen’s South African Medal with four clasps.

Upon his return from South Africa, Elmslie trained as a Chartered Accountant at the University of Glasgow. His father was also an accountant, with his own firm, and Elmslie became a partner in the family business – the name of which changed from ‘Messrs Alexander Tosh’ to ‘Messrs Alexander Tosh & Son’.

When war broke out, Elmslie’s military training required him to enlist with the 4th Battalion of the Black Watch. He was commissioned to the rank of Major, and was sent to France in February of 1915. He was wounded shortly after his arrival in France, on the 9th of May 1915.

In September 1915, Elmslie was involved in the Battle Of Loos. He was killed in battle on the 25th September 1915. Major Tosh is commemorated at Pont-du-Hem Cemetery, La Gorgue, France, and on the St Margaret’s Church War Memorial, in Barnhill – the church of which he was a trustee.

Can you tell us more about Elmslie Tosh'? Some additional facts, a small story handed down through the family or perhaps a picture or an heirloom you can share online. Contact our curator...