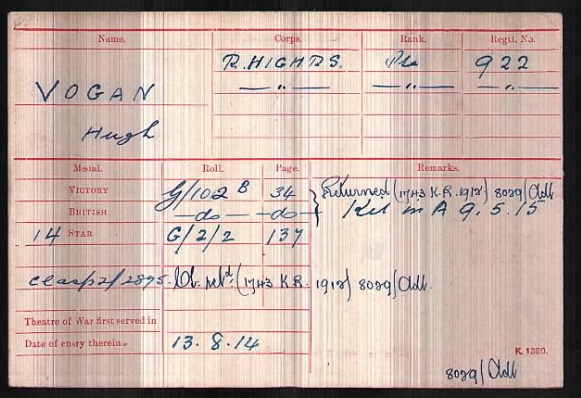 Hugh has no known grave but is remembered on the Le Touret Memorial.

Hugh was a Regular Army soldier  who had been serving with the 1st Bn Black Watch  since around 1905 and  he deployed to the BEF with the very first of Regular Army BEF Bns,   that being on 13 August 1914
He served with his Battalion through out the infamous fighting retreat of the BEF from Mons,  via Battle of the Aisne and to the 1914 battles surrounding the approaches to Ypres,  including being with the remnants of the Battalion at Polygon Wood where they along with remnants of other Bns such as Queens Own Cameron Highlanders fought off attacks by vastly superior numbers of the Kaiser’s elite, The Prussian Guards,  a site named Black Watch Corner,  very close to,  within a few hundred yards of where the Black Watch Corner Monument now stands.
Having survived the almost complete destruction of the original BEF in 1914 the battalion was reinforced from UK and quickly brought up to strength.   Whilst no longer and entirely “Regular Army” battalion due to the number of replacements drafts now in its ranks it none the less retained a strong cadre of Regular Soldiers  They now became involved in actions in Northern France including Neuve Chapelle and it was in this area where Hugh made the final sacrifice.   On 9 may 1915 the 1st Bn was involved heavily what has now become known as the Battle of Aubers Ridge.  Along with many other Dundonians of various regiments involved Hugh gave his all in this forlorn action.
His Medal Index Card reveals that he was entitled to the usual Great War trio of British War Medal,  Victory Medal and the much rarer 1914 Mons Star with Clasps,  otherwise known as Pip,  Squeak and Wilfred.   The interesting feature is that these were returned rather than kept by family.   Why this might have been the case is a matter of conjecture,   Were they unable to be delivered and therefore returned by postal service ?;  Were the family simply not happy to accept them ?  We can never know unless there are any descendants who can shed further light

Can you tell us more about Hugh Vogan'? Some additional facts, a small story handed down through the family or perhaps a picture or an heirloom you can share online. Contact our curator...