We need you to tell us more about the life and times of Thomas G. Walker 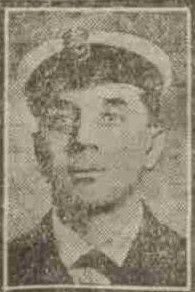 Thomas was the son of Michael and Jane Walker of Dundee. He was awarded the Naval General Service Medal (Persian Gulf). Thomas has no known grave but is remembered on the Chatham Naval Memorial. Accidentally drowne

Intimation has been received by Mrs Macdonald 25 Park Avenue, that her brother, Thomas G. Walker was lost at sea on 19th November.  Deceased had been in the Royal Navy for 18 years, and at the time of his death held the rank of chief engine – room artificer (first class).  Prior to the outbreak of war he had seen service in the Persian Gulf, and took part in the Dardanelles and other operations.  Before he entered the navy, he was serving his apprenticeship with Cooper and Greig.  Deceased was 41 years of age and unmarried, residing with his sister at 25 Park Avenue.  Another brother, Robert, met with a similar fate In December, 1915.

Can you tell us more about Thomas G. Walker'? Some additional facts, a small story handed down through the family or perhaps a picture or an heirloom you can share online. Contact our curator...