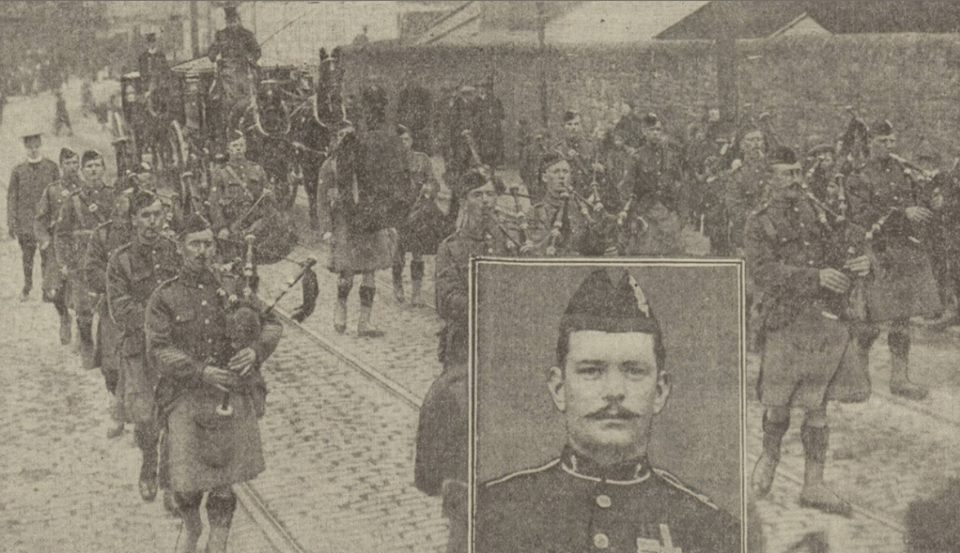 MILITARY FUNERAL IN DUNDEE. Impressive scenes were witnessed in Dundee yesterday afternoon at the funeral of Private Alexander Wallace, of the 1st Black Watch, who was buried with military honours in Balgay Cemetery. The Pipe Band and firing party were supplied by a detachment from the 6th Black Watch, and Lieutenant-Colonel the Rev. A. B. Scott, of the Tay Defences, conducted the services in the house and at the grave. Large crowds turned out to witness the funeral. Private Wallace, whose home was at 11 Littlejohn Street, was a Reservist, and crossed to France with the first Expeditionary Force. He took part in all the Black Watch’s engagements until January, when he was sent to an hospital in Grimsby suffering from rheumatics. He later came home on six weeks’ furlough, and had only been back in the Perth Depot for a week when he was found dead in bed in the barracks on Saturday morning. Deceased went through the South African War, for which he held two medals, without receiving a scratch. A widow and one child are left to mourn his loss. Inset is a photo of the late Private Wallace. The Courier, Thursday, 15 April 1915, 6.

Can you tell us more about Alexander Wallace'? Some additional facts, a small story handed down through the family or perhaps a picture or an heirloom you can share online. Contact our curator...