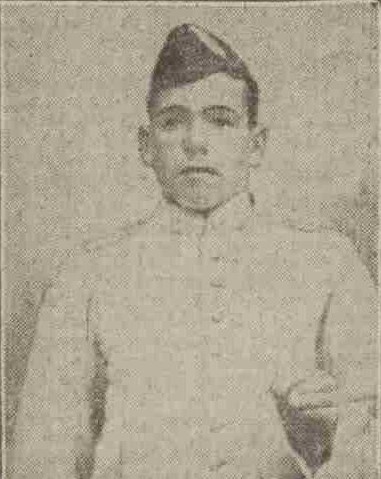 “WHILE BRAVELY DOING HIS DUTY AS A SOLDIER.”

The list of casualties issued during the weekend bears the name of another Dundee Black Watch hero who has given his life for his country’s cause.

Private C. Wallace, of the 2d Battalion Royal Highlanders, came across to France with the Indian Expeditionary Force, and met his death in the trenches in the last days of November.  His parents, who are in advanced years, reside at 18 Hunter Street. And a pathetic circumstance in connection with Private Wallace’s death is that he had been great assistance to his folk at home.

The parents of Private Wallace received intimation of their soldier son’s death through a chaplain, the Rev. Andrew Macfarlane.  The chaplain, in a sympathetic letter, states that Private Wallace was killed in action in the trenches on November 27 while bravely doing his duty as a soldier.

The letter concludes with, “Your son’s body was brought back from the trenches and buried in a small village, where his grave will be cared for, and marked by a wooden cross, which I will get made, with his name and regiment inscribed on it.”

The deceased soldier was only 25 years of age, and had been in the army for some six and a half years.  A married brother is in the 1st Black Watch.  The latter was at the front but was invalided home, and is now on duty up North.

Can you tell us more about Charles Wallace? Some additional facts, a small story handed down through the family or perhaps a picture or an heirloom you can share online. Contact our curator...