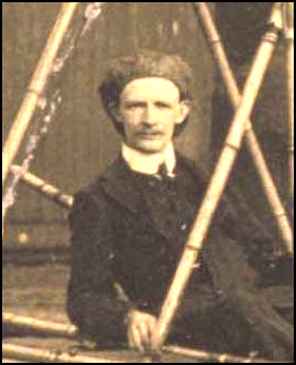 On 16 March 1915, Watson gained his Royal Aero Club Certificate No. 1,117 (equivalent of a pilot’s licence) with the London and Provincial School at the London Aerodrome, Hendon, having sought a commission with the Royal Naval Air Service with the outbreak of war in 1914. Sadly, on 30 June 1915 he lost his life when the Caudron G.3 aeroplane he was flying disintegrated in flight and crashed in Dunlye field, a few miles from the Cross-in-Hand Hotel, Sussex.

The news of the tragic death of Flight Lieutenant Watson of the Royal Naval Air Service, came as a shock to his many friends in Dundee and district.

It appears that Lieutenant Watson was flying in a biplane at a great height over Cross-in-Hand, East Sussex.  Something went wrong with the machine, which descended with great violence in a field.  Two men who witnessed the accident rushed to the spot and found the officer dead.  The machine was wrecked, portions of it being found in an adjoining field.

People living near the scene of the accident stated that they heard the aeroplane engine, but could not see the machine.  There was a report, following which the machine appeared below the clouds and fell to earth with a crash.  It is thought that an explosion must have taken place above the clouds.

Fell in a Field.

Eye-witnesses of the mishap state that the aeroplane dropped like a stone into a field nearly opposite the Cross-in-Hand Hotel, belonging to Mr J. Herring.  Several people from houses nearby and some haymakers were quickly on the scene, but found the pilot beyond all aid.  His body was buried beneath the debris of the shattered biplane, his head and shoulders only being visible from between the engine and propeller.  He was quite dead.  Dr Holman was called, but could do nothing, and the body was removed to the coach-house of the Cross-in Hand Hotel.

The wreckage was immediately taken charge of by the military authorities, and the field guarded. Mrs Dove, whose backyard adjoins the field into which the machine fell, stated that she heard a noise as of an aeroplane’s engine, but on looking into the sky could see nothing.  There was a loud report, and then the machine was seen to be falling rapidly.  After it struck the ground Mrs Dove said splinters flew into the air to a height of about 50 feet.

The remains of the late Flight Sub-Lieut. Preston A. Watson of the Royal Naval Air Service, who met his death in an aeroplane accident in the South of England, were interred in the Western Cemetery, Dundee, on Saturday afternoon, with full military honours.  The service to which the deceased officer belonged was represented by a detachment of officers and men, who placed beautiful floral tributes on the grave.  The bands of the 5th Scottish Provisional Battalion (9th Royal Scots) also took part in the proceedings, and the firing party from the same battalion was under the command of Lieutenant Matley.

Can you tell us more about Preston Albert Watson'? Some additional facts, a small story handed down through the family or perhaps a picture or an heirloom you can share online. Contact our curator...