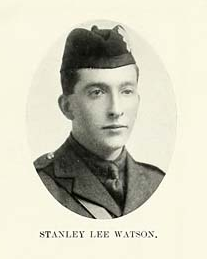 Stanley had a brother who also served during the Great War, he was, Lieutenant Frederick Johnston Watson of the 43rd Battalion, Canadian Infantry, killed in action 10 June 1916. Stanley has no known grave but is remembered on the Loos Memorial.

No further news has yet been received regarding Captain Stanley Lee Watson, who was reported missing and unofficially reported killed, but yesterday Mr E. A. Watson, Norwood Cottage, Newport, received the following telegram :—

“The King and Queen deeply regret the loss you and your army have sustained by the reported death of your son in the service of his country.  Their Majesties truly sympathise with you in your sorrow.”

Captain Watson who was 22 years of age, was the youngest son of Mr Watson.  He was in the service of Mackay, Irons & Co., C. A. and would have sat for the final examination but for the outbreak of war.

Captain Stanley L Watson, was the youngest son of Mr Edwin A. Watson (of Messrs Thos-Muir Son, & Patton, coal merchants). Though only twenty-two years of age, he was a very efficient officer.  He joined the battalion as a private, and after serving as a corporal and as a sergeant he received a commission as Second Lieutenant in the second line of the “Fourth” shortly after the outbreak of war.  His fine soldierly qualities quickly gained him further recognition, and he was successively promoted Lieutenant and Captain.  He went to the front some months ago.  In conveying the intimation of his sad fate to his father, Major Rogers speaks of him as “ a very gallant soldier, whose loss we all deeply mourn.” A tribute in which all who knew him will sincerely join.  Captain Watson before mobilisation was employed in the office of Messrs Mackay & Irons, C. A., and was preparing for his final examination.  His brother Fred is a Lieutenant in the Canadian Expeditionary Force.

Can you tell us more about Stanley Lee Watson'? Some additional facts, a small story handed down through the family or perhaps a picture or an heirloom you can share online. Contact our curator...