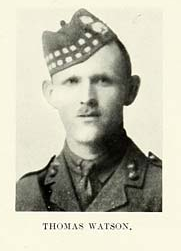 Thomas Watson was a member of St Andrews University OTC when he was appointed to 6/7 Royal Scots Fusiliers. He saw much active service in France before meeting his death near Arras. “Big Tom”, as he was known, was interested in sport and never wearied in organising games for his men when the Battalion was out of the line.

Captain Watson was shot through the chest by a sniper when leading his men during the big advance.

Can you tell us more about Thomas Watson'? Some additional facts, a small story handed down through the family or perhaps a picture or an heirloom you can share online. Contact our curator...