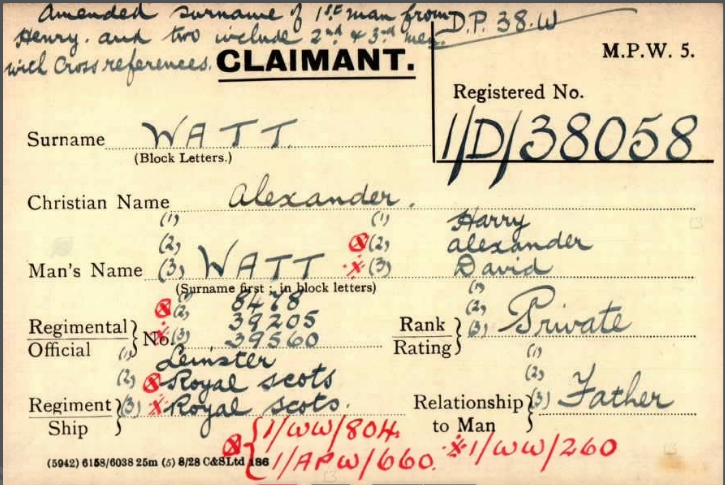 Harry has no known grave but is remembered on the Menin Gate Memorial. Harry had 3 brothers who also served during the Great War, they were, Pte Alexander Watt 39205, 13th Battalion Royal Scots who was killed in action 22.08.1917 at Frezenberg, Belgium, Pte David Watt 39560, 13th Battalion Royal Scots who died of wounds 14.02.1918 at the 3rd London General Hospital, Wansworth, and a 3rd brother who survived the war as a P.O.W.

Private Harry Watt, 1st Leinsters, fell in the course of a fierce attack on the German trenches on 12th inst.  Intimation of his death is contained in a letter which his father, Mr Alexander Watt, Seafield Road, Dundee, received yesterday.  The Leinsters had charged five times, and it was in the last attack that his son was laid low.  Deceased who was 26 years of age, had served seven years with the colours, and was drafted from India to France.

Can you tell us more about Harry Watt'? Some additional facts, a small story handed down through the family or perhaps a picture or an heirloom you can share online. Contact our curator...