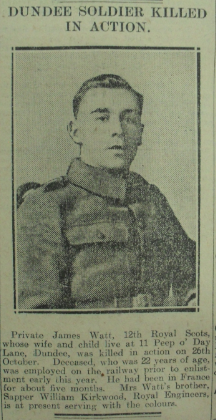 Private James Watt, 12th Royal Scots, whose wife and child live at 11 Peep o’ Day Lane, Dundee, was killed in action on 26th October.  Deceased, who was 22 years of age, was employed on the railway prior to enlisting early this year.  He had been in France for about five months.  Mrs Watt’s brother, Sapper William Kirkwood, Royal Engineers, is at present serving with the colours.

Can you tell us more about James Ferguson Watt'? Some additional facts, a small story handed down through the family or perhaps a picture or an heirloom you can share online. Contact our curator...